[Warning: This post contains some spoilers for The Secret Life of Walter Mitty]

I can’t sleep on planes. Being a freakishly light sleeper anyway, the constant sound of EEEEEEEEEEEEEEEEEEEEEE and occasional roller coaster turbulence moments and people walking up and down the walkway inches from my lolling head, sleep just doesn’t happen.

So on the overnight, seven hour stretch of a twelve hour journey back from visiting the boyfriend in Illinois, I was pretty stuck for things to do. I’d already listened to all the podcasts I’d downloaded in preparation for the journey (prepared poorly, I might add), I didn’t feel like reading any more of A Dance With Dragons (42%–I’m hoping to get it finished maybe before Christmas), and I couldn’t be bothered trying to write with a bluetooth keyboard that only sends around 2/3rd’s of the keystrokes to my tablet.

I spotted The Secret Life of Walter Mitty amongst the paltry film choices, and I thought, what the hell.

Now, going into this film, I knew only two things about it: 1, Walter Mitty liked to daydream, and 2, Walter Mitty was played by Steve Carell.

You may have noticed something wrong there, but herein lies my story. 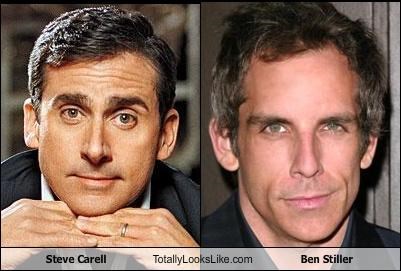 Google reassures me I’m not the only person to have made this mistake.

However, I’m fairly confident I am the only person who watched the entirety of The Secret Life of Walter Mitty waiting for Ben Stiller to turn into Steve Carell.

Because going into this film knowing 100% that Walter was a daydreamer and Walter’s character was played by Steve Carell, I came to the conclusion that Walter was only played by Ben Stiller when he was daydreaming.

That’s right, I watched the entire film thinking it was a never-ending daydream.

When it opens on Stiller checking his dating profile over breakfast, my thought process went like this: “Oh, so he’s not awake yet–maybe he’ll send the girl of his dreams a message in his dreams, because he doesn’t have the stones to do it in real life, and then we’ll see Carell waking up…oh, okay, so he’s dreaming about going to work. Odd. Well, he’s about to meet his new boss. Maybe the camera will shift and we’ll see what Walter really looks like…oh, no. Hmm.”

And I went on thinking like that for two hours.

When he heads off on his adventure to Iceland to find the elusive freelance photographer and get a copy of the missing negative that’s resulted in his job on the line, I thought it was all in his head. When he jumps out of the plane aiming for the wrong boat and is almost eaten by a shark? I figured, pfft, that’s far too ridiculous to be real. Any minute now…and of course, it was real, and Stiller never became Carell.

It actually made the film marginally more interesting, because without that aspect of a completely imagined impending plot twist, I would’ve turned it off as quickly as I turned off Gravity (3 minutes in–sorry, these films might impress the cinephiles, but not me, the luddite who can’t differentiate her Stillers from her Carells).